Just show up and discover treasures in every NYC neighborhood on any one of these guided walking tours. Bring a friend and share the fun of a sightseeing-storytelling adventure.

Check the status of your subway, see web.mta.info/weekender for changes and closed stations. 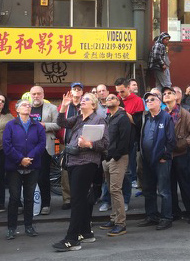 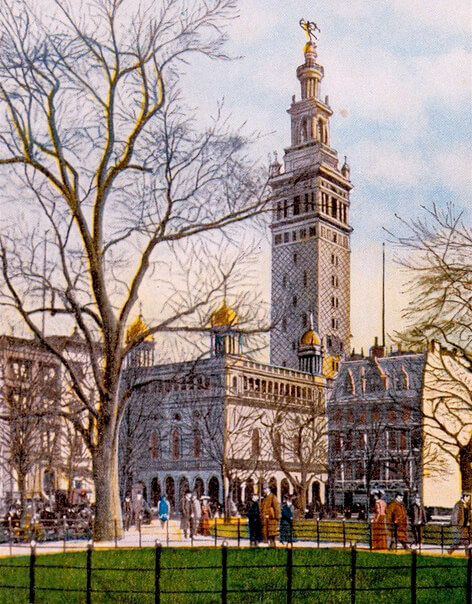 THE ROSE HILL SECTION OF NOMAD — THROWING OFF VICTORIAN CONSTRAINTS

Rose Hill once held homes of old moneyed New Yorkers, but also included a safe house of the Underground Railroad. It was once the site of a snooty church, but just around the corner frequent assignations and colorful goings-on were part of that 1890s scene. Today you can see whole streets of stately Beaux-Arts buildings and a structure once tallest in the world. The dense vegetation of its beautiful park shields quiet space for art installations, children’s play, and a popular outdoor eatery.

Highlights include:
• Winston Churchill’s Iroquois ancestor
• The Southerner who became a hero of the Yankee cause in the Civil War
• A noisy gravesite
• Where Madonna got her start
• The Crime of the Century
• The announcement at dawn, “You are now the President of the United States” 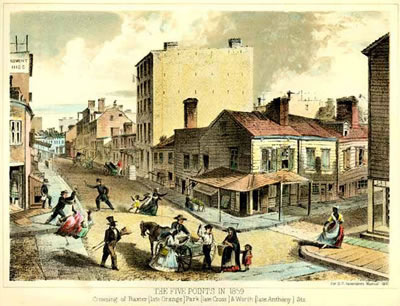 GANGS OF NEW YORK AND THE BLOODY FIVE POINTS

Just east of today's City Hall and Municipal Building, this was once a foul-smelling, disease-ridden district. Brought to life in the movie Gangs of New York, it was a place of violence, gang wars, poverty, and corruption. The district evokes such places of notoriety as Paradise Square, Cow Bay, Bottle Alley, and such gangs as the Roach Guards, Plug Uglies, Shirt Tails, and Dead Rabbits. 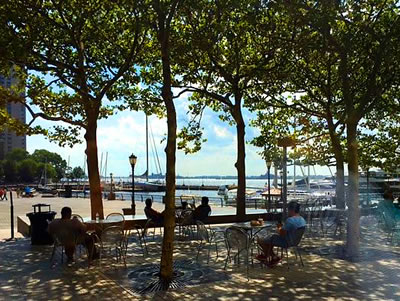 Replacing deserted piers along Lower Manhattan's Hudson River shoreline, Battery Park City has emerged as a remarkable living space. Its 92 acres of landfill were developed by the Battery Park City Authority, an innovative group of public and private advocates.

The secret of Battery Park City's success is its integration of public amenities and private initiatives in artistically-designed natural landscapes, including hills, secret paths, and glorious panoramas.

Highlights include:
• Parks with playfields that include dramatic vistas, hilly woodlands, and delightful yet sinister sculpture
• Poetry House, the Irish Hunger Memorial, Winter Garden, and public bathrooms galore
• Politics of the public-benefit corporation
• Environmentally state-of-the-art private spaces
see the write up on this tour in the Tribeca Citizen 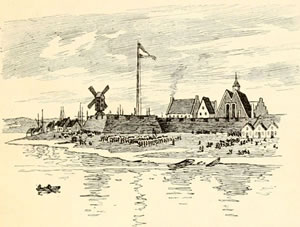 MEET: Museum of the American Indian, south end of Bowling Green park, at foot of Broadway. Subways: #4 or #5 to Bowling Green, R to Whitehall, or #1 to Rector St.

In 1654, 23 Jewish immigrants arrived in Dutch New Amsterdam. Settling into their new life included adapting to restrictions imposed by the frontier town, and dealing with subsequent Jewish arrivals with traditions different from their own. The first Jewish immigrants to Manhattan arrived in 1654, during Dutch colonial times. The small group of 23 men, women, & children were allowed to stay, but with considerable restrictions. Their immediate concern was how to earn a living when many occupations were closed to them.

During the Dutch and British periods groups of Jews arrived from a variety of countries. The process of their making Manhattan a home involved creating a place to pray, providing kosher food, keeping their children within the faith, and balancing the interests of Sephardic and Ashkenazi residents. 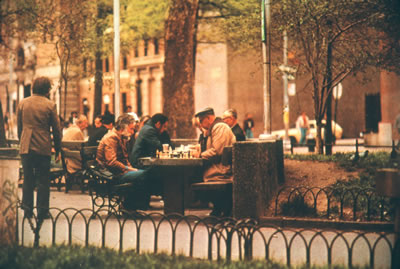 In its earliest years Greenwich Village was a refuge from the yellow fever epidemic downtown. By the early 20th century, the Village had become home to artists, writers, and playwrights looking for an unconventional environment and creative freedom. Protesters came here in their struggles for the vote for women, better working conditions, opposition to war, and gay and feminist rights. 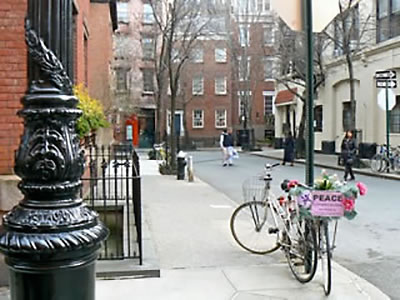 THE INTIMATE WEST VILLAGE WITH ITS SPECTACULAR WATERFRONT PARK

The West Village is a 19th century preserve with its concealed-yet-open garden, complex web of streets, and a house 9½ feet wide. Classic 19th century 3-story townhouses set the stage. This is a community neighborhood of quirky angled streets with literary hang-outs, European-style coffeehouses, and Off-Broadway theatres — the quintessential American Bohemia. Its sites inspired Edgar Allan Poe's “The Raven”, and O. Henry's “The Last Leaf.”

But one block west of its border, the neighborhood changes abruptly. Gone are the run-down remains of waterfront commerce — transient hotels, cheap bars, and old factories. Now new tall glass-covered buildings rise up with celebrity-filled condominiums and look out over a spectacular, transformed waterfront. Today the shoreline is alive again, this time with grassy playing fields, quiet lawns, children's playgrounds, and 800' long restored piers. 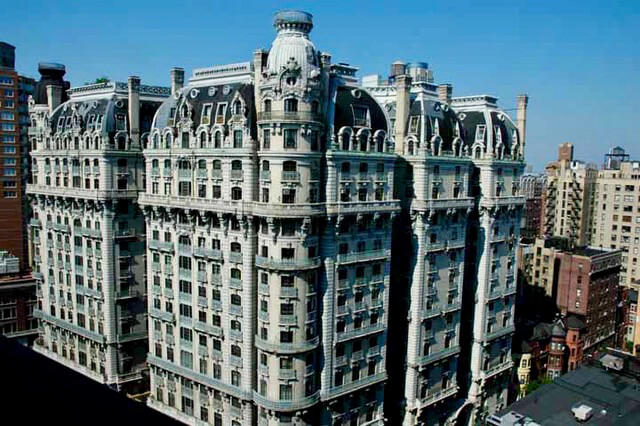 FAR WEST 70s — BETWEEN THE APTHORPE, THE ANSONIA, AND THE RIVER

The far West 70s of the Upper West Side long exhibited a pull between opposing identities.
• It sported imposing mansions, many of which were later converted into rooming houses.
• It offered beautiful Hudson River vistas, which vied with saloons, coal yards, & smoke from steam railroads along the river.
• A statue of Eleanor Roosevelt graces Riverside Park 1 ½ miles from where her alcoholic father died.
• The center of America’s drug addiction in the 1970’s bumped up against apartments of America’s cultural icons.
• Developers changed street names to raise the neighborhood image, but impressive real estate was rejected for being on the “wrong side of Central Park”.

Highlights include a statue built to inspire young Italian-Americans, residences by some of New York’s most illustrious architects, and a neighborhood that has taken hold of its identity to be a much sought-after residential enclave. 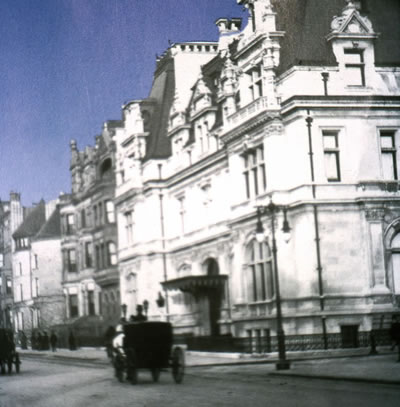 The creation of Central Park in the 1870s destined Fifth Avenue — the park’s eastern border — to become one of New York’s most elegant addresses. Great historic mansions, including those of Henry Clay Frick and James B. Duke, began to line the avenue. Much of the wealth that created this Gold Coast was earned rather than inherited. 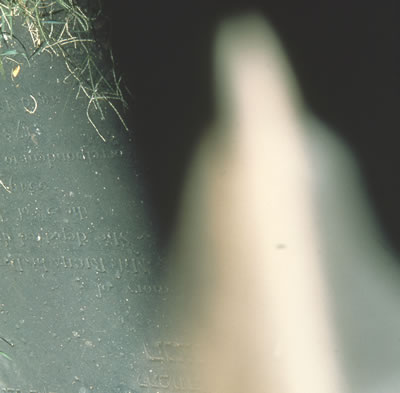 Celebrate the Halloween season with some of the spookiest stories in New York — murders, hangings, explosions, famous missing persons, specters, hauntings, and ghosts. Death lies in plain view —if you know where to look.
Highlights include:
• Washington Square Park graveyard
• The 19th century Jewish graveyard
• Newgate prison
• The murdered architect
• The tale of the haunting artist
• America's most famous missing person
• Hangings, and the hangman's house
• Edgar Allan Poe's home and his inspiration for The Raven
• The day the music died 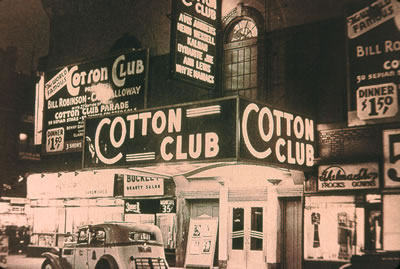 In the 1880s, the new elevated railroad converted Harlem from a rural district into tracts of beautiful homes for wealthy New Yorkers. By the 1920s, downtown development and the new subway changed the neighborhood into one of the nation's most famous African-American communities.

Highlights of the tour include:
•  Sites of the artistic and literary Harlem Renaissance
•  Alexander Hamilton's last home
•  Strivers Row, Sugar Hill, and Hamilton Heights
•  Abyssinian Baptist Church
•  One of world's greatest collections dedicated to the study of black culture 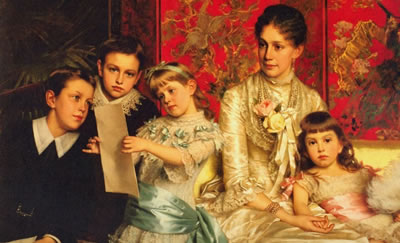 Between 78th Street and 92nd Street, Fifth Avenue still has a concentration of formidable Gilded Age mansions. The industrial age moguls who built these city chateaux were vying to outdo one another & flaunting their wealth & worthiness for all to see. Women of the new-monied class competed for social standing with clothing, parties, and aristocratic connections. 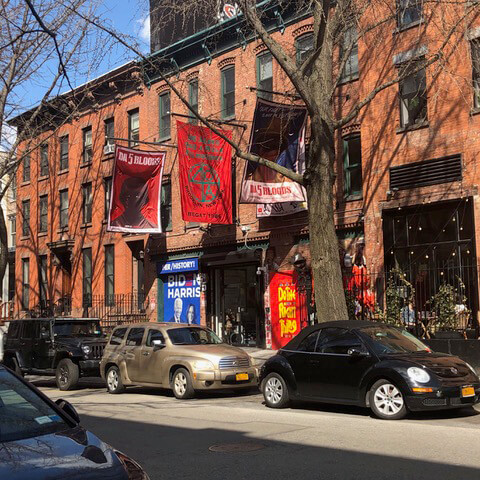 FORT GREENE, BROOKLYN – FROM THE UNDERGROUND RAILROAD TO AFRICAN-AMERICAN PROSPERITY

Fort Greene is renown for a number of institutions:
The Brooklyn Academy of Music for its cultural presentations,
The Williamburg Bank for its tall prominence,
Fort Greene Park for its Prison Ships Martyrs’ Monument,
It is adjacent to Barclays Center, famous for its basketball teams the New York Nets and the NY Liberty.

But its African-American history is one of the neighborhood’s most intriguing aspects.
—  The first Free Black school in Bklyn began in Fort Greene in 1847.
—  In the early 19th century the area attracted African-American shipbuilders working in the nearby Brooklyn Navy Yard.
—  Abolition and Underground Railroad activity was strong before the Civil War.
—  Over 40% of its population today is African-American. 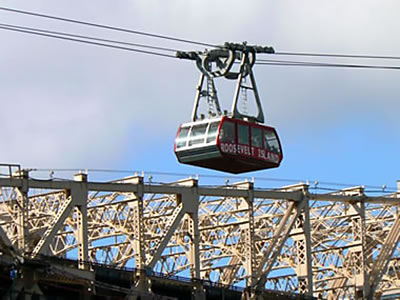 Set in the middle of the East River, Roosevelt Island served as a place to pasture swine for the Dutch, and later as the Blackwell family farmland. In the early 19th century the city bought the island and for 100 years used it to house the unsavory services of prison and madhouse. In the last few decades, it has become a thriving mixed-income town built from a Master Plan. The most recent addition is at the center of the island - a striking set of glass buildings that house a unique partnership to promote high tech innovation and entrepreneurship. 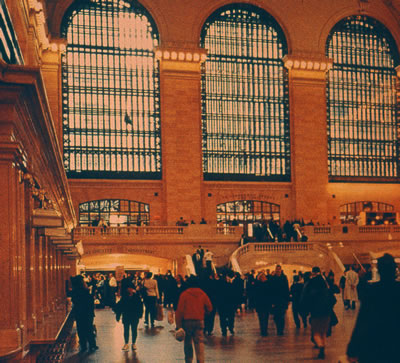 MEET: In the Jacqueline Kennedy Onassis Foyer, just inside GCT entrance at E. 42nd St. under the Park Ave. viaduct.

New York’s monument to movement, Grand Central Terminal opened over 100 years ago and it remains one of great architectural beauties of the city. The dramatic structure is a thrilling symbol of the fast-expanding commercial and intellectual reach of what was becoming the greatest city in the U.S.

A majestic Beaux Arts rendition of a classical form, Grand Central is impressive outside and within. A monumental sculpture crowns its 42nd Street façade. The Main Concourse has the soaring dimensions of a cathedral. The building seems to embody the huge purpose of the terminal — to move great numbers of people, to provide services for travelers, to outshine its rival, and to create a real estate boom with the innovation of air rights.

Additional highlights of the walk include:
• The tragedy that led to its creation
• Design that made traffic flow and luggage glide
• Its history-making role in landmarking New York City’s heritage
• The Campbell Apartment
• Commodore Vanderbilt, Whitney Warren, Jackie Onassis
• The Whispering Arch 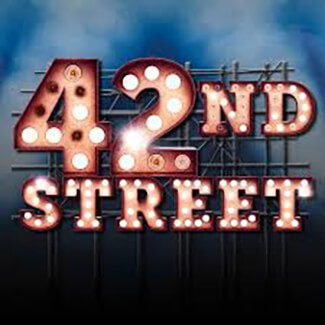 Forty-Second Street hosts some of the most glorious places in New York City—the New Amsterdam Theater, Grand Central Terminal, Times Square, the Chrysler Building, Bryant Park and the New York Public Library. Great news organizations —The New York Times, Reuters, and The Daily News —have made 42nd Street a media mecca. All along that thoroughfare, people converge on these important places and feel the beat of the great city.

And that beat has been drawing folks for over 100 years, even though live cattle and slaughterhouses stank up the east and west ends until the 1940's. Forty-Second Street had met many of the challenges of urban co-existence long before the United Nations took its place at the east end of this famous thoroughfare.

Private tours are always available, beginning at $325 for up to 6 people. Tours for larger groups are also available.
Get a quote for your tour - contact Joyce.